Omics techniques reveal shifting microbial presence and function, and the importance of interactions between microbes that carry out iron, sulfur, and carbon metabolism. SR-FTIR reveals changes in microbial communities and soil chemistry. Together, the techniques enable in-depth functional characterization of microbial metabolism in permafrost to understand microbial responses to thaw and how it may contribute to greenhouse gas emissions. 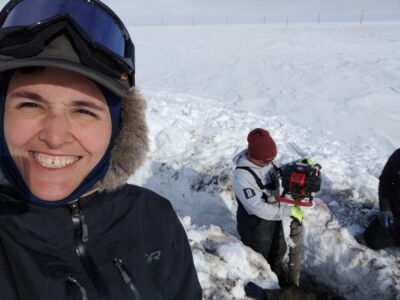 As climate change melts Arctic permafrost, vast reservoirs of organic matter have become accessible to decomposition by the soil’s diverse cold-adapted microbes. Understanding the microbial response to thaw and the resulting alterations to nutrient cycling and greenhouse gas emissions in these environments provides clues to how the Arctic landscape may change in coming years.

Neslihan Taş, an environmental microbial ecologist and research scientist in the Climate and Ecosystem Sciences Division at the Lawrence Berkeley National Laboratory (LBNL), employs a unique combination of omics methods and soil chemistry analyses to investigate the complex and shifting microbial processes in melting permafrost soils and their impacts on biogeochemical cycles in Alaska, Norway, Canada, and Russia. Her work defining the principles underlying microbial systems as they respond to and modify their environments addresses a fundamental science topic supported by the structural biology and imaging resources of DOE’s Biological and Environmental Research (BER) Program.

“I like to think about things in their complexity, not just a specific protein or one single bacterium or a single process,” Taş says. As a postdoctoral research fellow at LBNL (2011-2014), Taş was attracted to the diversity of resources and methods offered by DOE and BER that she knew could help her define such complexity. She also noticed a change regarding approaches to investigating environmental samples: researchers had begun moving away from analyzing bulk, homogenized samples and toward considering processes that occur at different spatial scales. “I was inspired to think about what kind of information is relevant to collect in different scales so we can understand the totality of a soil better. And obviously it’s a very, very difficult thing to do.”

Taş saw that one particular program—Berkeley Synchrotron Infrared Structural Biology (BSISB)—was using infrared methodologies to look at molecular structure and chemical bonds and thought similar techniques might work for chemical investigations of complex communities or materials like soil. “There’s quite a lot of potential power in combining technology like infrared with synchrotron,” she says, because every soil type is so complex. “The sizes are different, the materials are different, the microbes are different every place that you go.” But, as Taş would soon realize, numerous obstacles prevented the use of infrared for this application.

Taş encourages new users to talk with beamline scientists early in their research and not hesitate to discuss the challenges they face.

By 2016, Taş had become a research scientist at LBNL and approached BSISB program director Hoi-Ying Holman to propose a collaboration. An innovator in the field of autonomous discovery, Holman uses algorithms to learn from scarce input data and determine subsequent experimental steps with minimal human intervention. These discoveries enable Holman to decipher relationships between genome and functional processes and identify connections between genomes and natural environments. Holman listened as Taş described her ideas for improving the infrared technology and resolving its remaining challenges together. Then “Hoi-Ying sat me down and explained that probably [my approach] was wrong,” Taş laughs. “Which I really love because there’s nothing like a good intellectual challenge, right?” And then Holman explained that there were certain things Taş needed to think about in a different way.

This frank conversation, coupled with others about how infrared imaging could be applied, under what conditions, and what technical hurdles needed to be resolved, sparked ideas leading to Taş’ successful application for a DOE Early Career Research grant in 2017 titled Awakening the Sleeping Giant: Multi-Omics Enabled Quantification of Microbial Controls on Biogeochemical Cycles in Permafrost Ecosystems. “Basically, what we had in mind was how to tackle the complexity of permafrost soils and answer several questions that I felt were critical to the fields of Arctic microbiology, permafrost microbiology, and climate science in general. And how we can use the core technologies that BSISB develops to image things that we would not be able to see otherwise.”

The Power of Synchrotron-Based FTIR 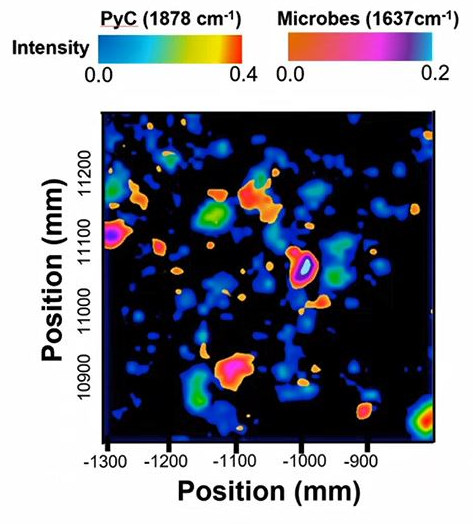 SR-FTIR imaging maps microbial distribution and identifies chemical functional groups of biological molecules. The infrared imaging technique coupled with autonomous artificial intelligence can be used to scan soil samples looking for markers and signatures related to a particular science question. For example, when looking for microbes, the system flags the amide signature of membrane lipids, but when looking at organic matter and minerals, the system flags specific carbon and mineral signatures. [Image courtesy of Neslihan Taş.]

Taş and her team began by analyzing the soil chemistry of some existing samples using synchrotron radiation-based Fourier transform infrared spectral imaging (SR-FTIR) at the BSISB beamline of the Advanced Light Source, a BER-supported resource. “It was mind-blowing,” she says. “We got very positive results early on.” According to Taş, most conventional infrared imaging can only penetrate two microns into a material. But the synchrotron’s power enables the beam to penetrate through the entire sample. “So, if a microbe is sitting on an organic material, you can see the microbe and you can see the organic material all in 3D space,” she says.

The team was able to nondestructively observe microbes within soil samples, examine their intracellular and extracellular chemistry, and analyze the chemical signatures of the bonds. The SR-FTIR system gives different vibrations of the bonds that can be decoded to determine related compounds, such as the signature for organic material, minerals, or bacteria. “It was very impressive to be able to observe bacteria sitting on each other, on soil, or on organic material. It was seeing in a different way.”

“To be able to just put your sample under a microscope without preparation and let the data speak back to you—it’s something very powerful,” Taş says, speaking of the SR-FTIR instrument. “It enables you to see exactly what’s under the microscope and let the data drive your thinking. And that’s where the science happens.”

Autonomous Artificial Intelligence to the Rescue

The results were promising, but a significant hurdle remained for complex soil samples. “It was very nice to be able to observe the organic material and the microbes, but it takes forever to find them sometimes.” For a single soil sample ranging in width from a few microns to several millimeters, imaging the entire sample field with SR-FTIR could take up to 20 days—a clear problem when users typically only received around 18 hours of beam time to image their samples. “It’s impossible to do soil if you work in that way,” Taş says.

So, the BSISB program set about developing an artificial intelligence-based model to scan a sample and zero in on hotspots for deeper analysis without wasting time imaging the vast void. “The BSISB team demonstrated this first for cells and larger material. And then they used my soils to showcase that we can do this in soil too,” Taş says. “And from those 20 days, now we are down to one and a half hours per sample.”

“Back in the day you couldn’t do reasonable statistics for this because you only had time for like two samples if you were lucky. Now, I can measure multiple samples and replicates and have some time left,” Taş says. “I can measure all the microbes and all the chemistry around them, I can do it in replicate so I can account for sample-to-sample variation, and I can do multiple samples so I can account for space-to-space variation. We are finally generating enough data to match the high-resolution genomics data we gather,” which enables merging of scales in the microbial space where scale at the micro level can be correlated to scale at the macro level, Taş says.

Now in the fifth and final year of her Early Career project, Taş says “I’m really happy and proud to say that we actually did get most of the project tasks done.” Several publications are expected by the end of 2022 describing the application of SR-FTIR to analyze complex samples such as soil. In addition, Taş and her team have used the combination of SR-FTIR, metagenomics, and metatranscriptomics to begin quantifying the impacts to microbial metabolism of environmental drivers, such as ice content, topography, continuity, active layer depth, and vegetation in the thawing Arctic. The omics techniques reveal shifting microbial presence and function, and the importance of interactions between microbes that carry out iron, sulfur, and carbon metabolism. SR-FTIR reveals changes in microbial communities and soil chemistry after permafrost thaws, uncovering the specific organic compounds and metabolites that accumulate in these soils. Together, the techniques enable in-depth functional characterization of microbial metabolism in permafrost to understand microbial responses to thaw and how it may contribute to greenhouse gas emissions.

BSISB and other BER resources offer “unique and wonderful opportunities” to learn from scientists who are experts in the field and are developing the technology versus simply trying to learn from published papers, Taş says. When the BSISB beamline scientists learned about Taş’ spatial complexity challenge with Arctic soils, they saw it as a problem for everyone in the research community. “They started with one user like me and now it’s possible to provide it as a community resource. BSISB is very open to taking user input directly and finding ways to open it up to the community.” For this reason, Taş encourages new users to talk with beamline scientists early in their research and not hesitate to discuss the challenges they face.

Back to the Arctic 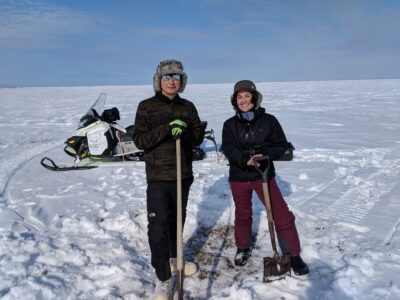 Although her Early Career project is drawing to a close, Taş doesn’t plan to stop studying Arctic ecosystems. “What I’m working on lately is data integration and what we can learn from different resolution data, evolving around experiments that I did in my Early Career project,” she says. “We were studying soil moisture and how microbes respond to changing moisture conditions in the Arctic, because we know that a portion of the Arctic is going to get wet, and a portion is going to get dry with climate change.” Taş wants to understand how to merge microbial and chemical data to predict landscape evolution and its responses to climate change. So, for the next couple of years she plans to focus on data integration to create a complex representation of a changing ecosystem that is both understandable and predictable. “The data that comes from BSISB is part of it. It was nice to have an Early Career related to such a large project that already has a great momentum.”