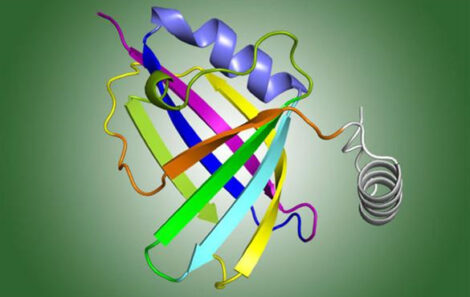 Each year in the United States, more than 57,000 children younger than 5 years old are hospitalized due to respiratory syncytial virus (RSV) infection, and about 14,000 adults older than 65 die from it. By age 2, most children have been infected with RSV, experiencing usually only mild cold symptoms. People with weakened immune systems, however, such as infants and the elderly, can face serious complications, including pneumonia and, in some cases, death. Now, scientists studying the virus using bright X-rays have found clues to how RSV causes disease. They mapped the molecular structure of an RSV protein that interferes with the body’s ability to fight off the virus. Knowing the structure of this protein will help them understand how the virus impedes immune response, potentially leading to a vaccine or treatment for this common infection.

With no approved vaccine and limited treatment for RSV, doctors prescribe the antiviral drug ribavirin only in the most severe cases because it is expensive and not very effective. Thus, most people with RSV receive only supportive care to make them more comfortable while their bodies fight off the virus. People with weakened immune systems face a tough fight with RSV. The researchers say that solving the structure of this elusive protein will enable them to see what the protein looks like and help them define what it does and how it does it. Ultimately, this capability and finding could lead to new targets for vaccine or drug development.

Scientists have long known that a nonstructural RSV protein (known as NS1) is key to the virus’s ability to evade the body’s immune response. However, its structure was unknown, so scientists were unable to determine exactly how the enigmatic NS1 interfered with the immune system. Using X-ray crystallography, the scientists determined the three-dimensional (3D) structure of NS1, and, in a detailed analysis of the structure, they identified a piece of the protein known as the alpha 3 helix, possibly critical for suppressing the immune response.

The findings also showed that the protein’s alpha 3 helix region was necessary for the virus to dial down the body’s immune response, giving the virus a better chance of surviving and multiplying—in other words, causing disease. Thus, a vaccine or treatment that targets the alpha 3 helix may supply what is needed to prevent immune suppression.