Binding of Alternative Substrates to Nitrogenase 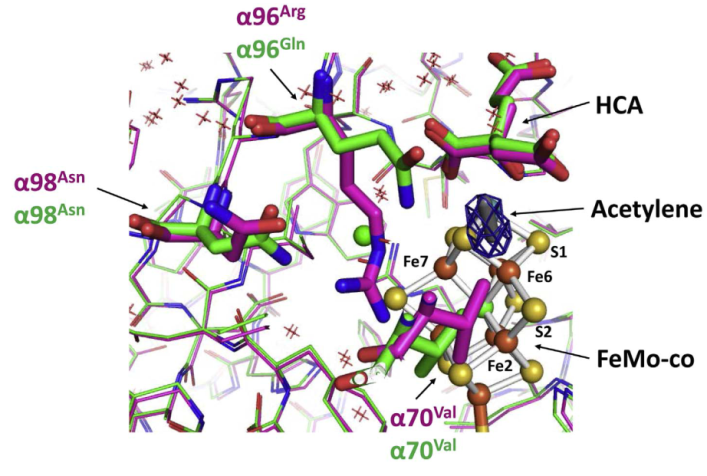 Diﬀerences at the acetylene binding site in the Arg96 to Gln variant and native molybdenum-iron (MoFe) proteins. Shown are the diﬀerences in the positions of the Val70, Asn98, Gln96 (mutant), and Arg96 (native) involved in acetylene binding at the active site of the Arg-Gln variant (in green) and native (3U7Q in magenta) MoFe proteins. Acetylene is modeled into the Fo-Fc electron density map (contoured to 4.0 σ, blue mesh) near the active site cofactor (FeMo-co). The amino acids of MoFe protein and a homocitrate molecule (HCA) are shown as sticks; FeMo-co is shown as balls and sticks. [Reprinted with permission from Elsevier from Keable, S.M., et al. 2018. “Structural Characterization of the Nitrogenase Molybdenum-Iron Protein with the Substrate Acetylene Trapped near the Active Site,” Journal of Inorganic Biochemistry 180,129–34. Copyright 2018.]

The most abundant nitrogenase, the molybdenum-dependent enzyme, contains two metalloprotein components, molybdenum-iron (MoFe) protein and Fe protein. During the reduction of N2 to NH3, single-electron transfers take place between the donor Fe protein and the MoFe protein. During this process the so-called “P-cluster” [an (8Fe-7S) cluster] in the MoFe protein functions as an intermediate electron carrier between the Fe protein and the active site cofactor (FeMo-co) in the MoFe protein. The nitrogenase enzyme is also capable of reducing small organic substrates such as acetylene (to produce ethylene), and research has demonstrated that N2 binding can inhibit acetylene binding, but acetylene does not necessarily inhibit N2 reduction. Currently, very little is understood about this apparent conundrum since no substrate-bound structures of nitrogenase were known.

Certain mutations (in particular at residues Val-70 and Arg-96) in the MoFe protein can result in an increased ability to reduce normally rather poor substrates (including propyne or 1-butyne), while other mutations can decrease the enzyme’s activity against N2 and acetylene. Some MoFe variants can trap alternate substrates (e.g., acetylene or cyanide) in the active site.

Researchers at Washington State University have determined the crystal structure of a variant of the MoFe protein with a glutamine residue in place of the native arginine at position 96. The mutant protein was crystallized in the presence of the alternative substrate acetylene, and the structure was solved by molecular substitution to 1.7-Angstrom (Å) resolution using data collected at the Stanford Synchrotron Radiation Lightsource (SSRL) beamline 12-2. The structure shows that the acetylene is trapped in a channel in close proximity to the FeMo-co site (see figure). Complementary theoretical calculations support the observation of acetylene binding at this site and are also consistent with more favorable interactions in the variant MoFe protein compared to the native MoFe protein. This is the ﬁrst structural evidence of a substrate trapped in the nitrogenase MoFe protein and is consistent with earlier assignments of proposed substrate pathways and substrate binding sites.