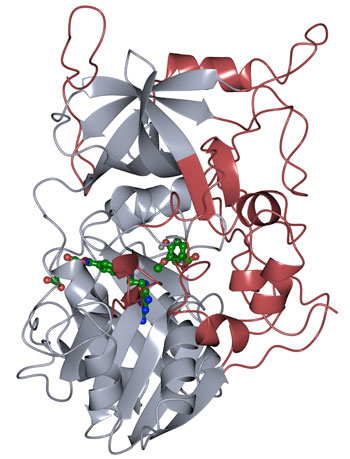 Researchers characterized aryl O-demethylation by LigM in Sphingomonas paucimobilis, a soil bacterium that metabolizes aryl compounds derived from lignin—the stiff, organic material that gives plants their structure. In biofuel production, aryl compounds are a byproduct of the breakdown of lignin, some pathways of which involve demethylation, an often critical precursor to additional modification steps of lignin-derived aryl compounds. The simple, single-enzyme system of LigM, as well as its functionality over a broad temperature range, makes it an attractive demethylase for use in aromatic conversion.

Other findings included: half the LigM enzyme was homologous to known structures with a tetrahydrofolate-binding domain that is found in both simple and complex organisms; the other half of LigM’s structure is completely unique, providing a starting point for determining where its aryl substrate-binding site is located; and LigM is a tyrosine-dependent demethylase. This research provides groundwork needed to aid in developing an enzyme-based system for converting aromatic waste into useful products.