Designing Cyclic Oligomers: Greater than the Sum of Their Parts 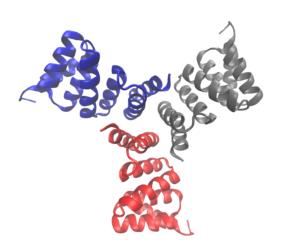 Cyclic proteins that assemble from multiple identical subunits (homo-oligomers) play key roles in many biological processes, including enzymatic catalysis and function and cell signaling. Researchers in the Molecular Biophysics and Integrated Bioimaging (MBIB) Division worked with University of Washington’s David Baker, who led a team to design in silico and crystallize self-assembling cyclic homo-oligomer proteins.

A strategy was developed that designs interfaces onto idealized proteins aimed to direct their assembly into multimeric complexes. Researchers used structural characterization, both X-ray crystallography and small angle X-ray scattering (SAXS), to show that many of the designs adopted the target oligomerization state and predicted structure. Not only does the work demonstrate that scientists have a basic understanding of what determines oligomerization, but that they could design proteins with tunable shape, size, and symmetry for a variety of biological applications.