DNA Gets a Bigger Alphabet 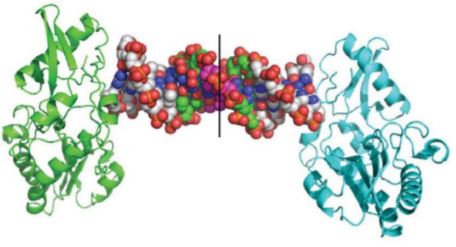 The crystal structure of a 16-mer Hachimoji DNA comprising Z:P pairs in green and S:B pairs in magenta. The duplex was stabilized as a host-guest complex with two N-terminal fragments from Moloney murine leukemia virus reverse transcriptase (shown as green and cyan ribbons). The asymmetric unit includes one protein molecule and half of the Hachimoji DNA, as indicated by the line. [From Hoshika et al. 2019. Reprinted with permission from AAAS.]

Four new DNA bases were synthesized and combined with the four natural bases to give an expanded genetic Hachimoji alphabet, capable of folding into a standard double helix and producing viable RNA.