Evolving a Virus-Like Capsid from a Bacterial Protein 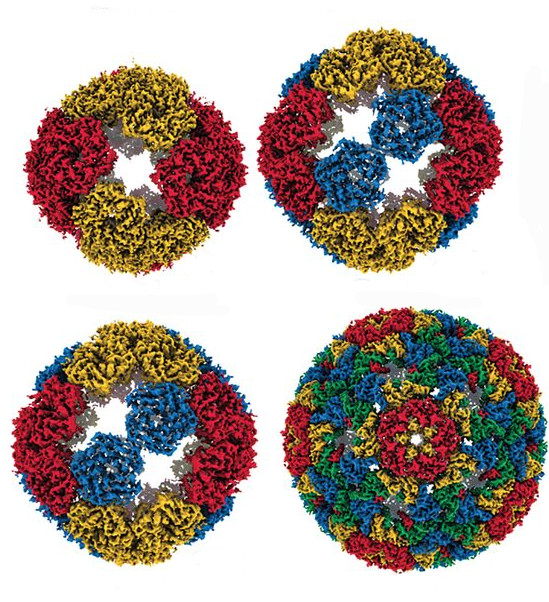 In a directed evolution experiment, scientists evolved a protein shell naturally occurring in bacteria (top left) into a protein container (bottom right) that can encapsulate RNA, mimicking a genome packaging mechanism used by viruses. [From Tetter, et al. 2021. Evolution of a virus-like architecture and packaging mechanism in a repurposed bacterial protein. Science, 372 (6547), 1220-1224. Reprinted with permission from AAAS.]

Using directed evolution, an international team of scientists have converted a bacterial enzyme into an artificial protein shell that encapsulates the enzyme’s own encoding RNA. Such capsids have previously only been seen in viruses, which use them as part of their replication machinery. Understanding how viral capsids evolved as a system for infecting cells with viral genetic material may help researchers design novel delivery mechanisms for gene therapies.

The team of scientists investigated the evolutionary history of how viruses build a protein capsid to protect their genetic material. Then they engineered an artificial capsid evolution system that started with a nucleocapsid derived from Aquifex aeolicus lumazine synthase, a bacterial enzyme that naturally forms 60-subunit nanocontainers. During artificial evolution, the nucleocapsid underwent a series of structural modifications, becoming much larger and more efficient at RNA uptake.

Among other techniques, the researchers used X-ray footprinting at the X-ray Footprinting of Biological Materials (XFP) beamline at the National Synchrotron Light Source II (NSLS-II), which enabled a view inside the evolved capsids and insight into how they encapsidate RNA. The XFP beamline operates in close association with the BER-supported Center for BioMolecular Structure.