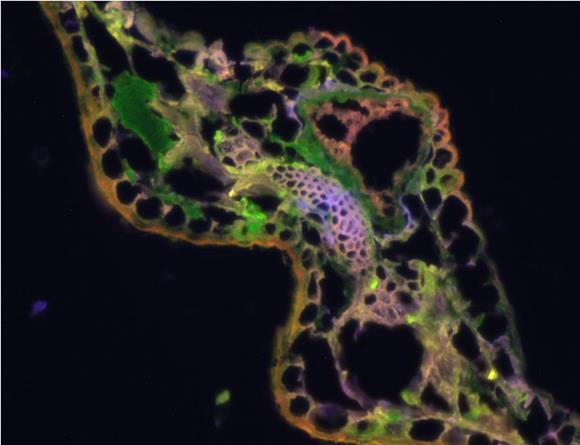 Microbial decomposition of plant debris (litter) regulates nutrient availability, ecosystem productivity, and carbon (C) cycling. Historically, scientists thought climate—primarily temperature and precipitation—regulated the rate of litter decomposition, which then influenced the rate at which nutrients become available and C contained in the litter was released back into the atmosphere as the greenhouse gas carbon dioxide (CO2). Recently, however, evidence has shown that geochemical factors also influence litter decomposition rates.

A research team has shown that long-term litter decomposition rates in forest ecosystems are closely related to the process of manganese (Mn) reduction-oxidation (redox) in a variety of forest ecosystems. A strong correlation had been observed previously between litter Mn content and decomposition rates, but the underlying mechanisms were not well understood. In redox cycling, redox governs Mn reactions, frequently mediated by microbes, which accumulate and oxidize Mn in the litter, then using the oxidized Mn species to break down plant cells.

By pairing high-resolution chemical imaging analysis with a long-term litter decomposition experiment under field conditions, the researchers discovered that litter decomposition is tightly coupled to redox cycling of Mn. The researchers discovered why Mn exerts such a strong control on litter decomposition rates and the mechanism of the underlying biogeochemical process, observing molecular changes within the litter as it decomposed over the years and probing structural changes within the very large biomolecules present in litter that frequently are not directly detectable by other means. This tunable technique also allowed the scientists to selectively ionize different biopolymers present in the litter, such as lignin, which is important because it lends rigidity to plant cell walls and protects litter from microbial decay.

In microenvironments within the litter, microbes actively cycle Mn as they colonize and break down the litter, and research indicates that biogeochemical constraints on bioavailability, mobility, and Mn reactivity in the plant-soil system may have a profound impact on litter decomposition rates. Understanding more about the mobility and reactivity of Mn in the plant-soil system also helps researchers improve their ability to accurately predict carbon cycling trends in ecosystems, contributing to greater insights into climate change patterns.