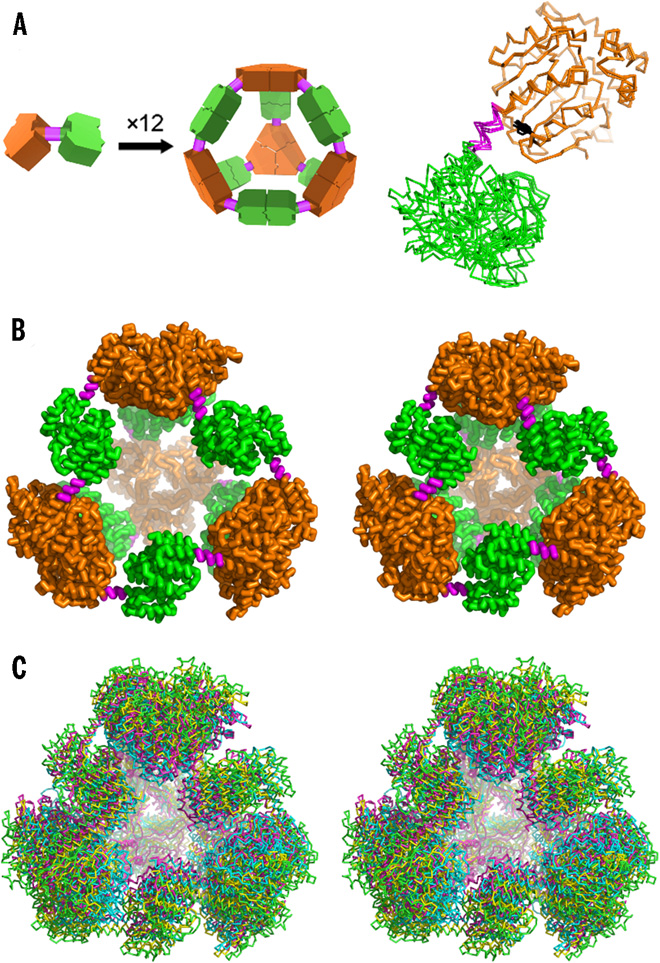 Designed and observed cage symmetry. (A) Left: Schematic diagram of the symmetry principles used to design the 12-subunit tetrahedral cage by fusing two oligomeric domains (green and orange) by a semirigid linker (magenta). Right: Single point mutation distinguishing our PCtrip construct from PCquad replaces tyrosine (black sticks) with alanine in the trimeric domain that makes contact with the linker. (B) Side-by-side view of the theoretically designed (perfectly symmetric) model of the protein cage (left) and the most symmetric crystal structure obtained in this work for the PCquad variant (right). (C) Walleyed stereo view of three crystal structures of PCquad (yellow, magenta, and blue) overlaid on the ideal model (green ribbon), showing the agreement of the observed structures and the design. [[From Lai, Y.-T., et al., “Designing and Defining Dynamic Protein Cage Nanoassemblies in Solution.” Sci. Adv. 2(12), e1501855 (2016). DOI:10.1126/sciadv.1501855. Reused under a Creative Commons license (CC BY NC-4.0, https://creativecommons.org/licenses/by-nc/4.0/.]

Large biological macromolecules (up to 10,000 atoms) can catalyze chemical reactions in ways that are difficult to replicate inorganically. Their size allows for the complexity needed to perform such functions, but it also makes them more susceptible to misfolding and aggregating—thus, the importance of understanding the fundamental architectural principles that cause large proteins to favor specific conformations. At the nanoscale, where organic chemical groups interact with solvent water molecules, these principles are very different from the ones used to build houses and cars. To investigate these principles, a group of researchers designed a protein that would self-assemble into a hollow pyramid (or tetrahedron). Upon crystallizing the macromolecule, the group found that they had indeed been successful in creating the assembly, but it was unexpectedly warped and collapsed in an asymmetric manner, with some edges bent inward—an asymmetric tetrahedron. To ensure that this was not an artifact of crystallization, they investigated the protein’s behavior in solution using small-angle x-ray scattering (SAXS), which showed that the collapse could be controlled by adjusting the solution’s salt concentration; the structure was disassembled by varying the pH.

The flexibility of this macromolecule suggests that it could be useful for the controlled capture and release of smaller compounds. Overall, the researchers expect that, with the tools and techniques developed here, the combination of SAXS with crystallography or electron microscopy could be increasingly useful in analyzing and optimizing designed protein assemblies and understanding their behavior in solution.