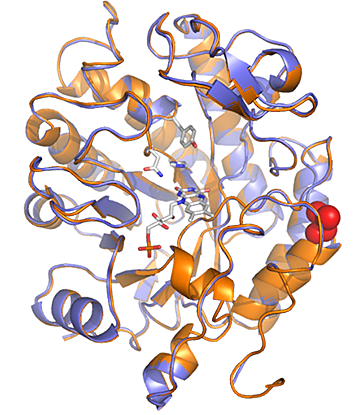 During synthesis of organic molecules, light is widely used to excite electrons in a substrate or catalyst, opening up reactive pathways to a desired product. In biological systems, light is used sparingly in this way, but coenzymes such as flavins can be artificially driven to excited states by light. Photoexcitation of promiscuous flavoenzymes can thus furnish previously unknown biocatalytic reactions.

Researchers investigated this reactivity of coenzymes and found a suite of flavoenzymes from the bacterium Gluconobacter oxydans that catalyze asymmetric radical cyclization when exposed to light. X-ray macromolecular crystallography revealed that photoexcitation enabled the flavin-dependent “ene”-reductases to convert starting materials containing an α-chloroamide and an alkene into five-, six-, seven-, or eight-membered lactams. After formation of a prochiral radical, the enzyme guides the delivery of a hydrogen atom from flavin—a challenging feat for small-molecule chemical reagents. The initial electron transfer occurs through direct excitation of an electron donor-acceptor complex that forms between the substrate and the reduced flavin cofactor within the enzyme active site.

*Image Use: Readers may view, browse, and/or download this image for temporary copying purposes only, provided these uses are for noncommercial personal purposes. Except as provided by law, this image may not be further reproduced, distributed, transmitted, modified, adapted, performed, displayed, published, or sold in whole or in part, without prior written permission from the publisher [AAAS].