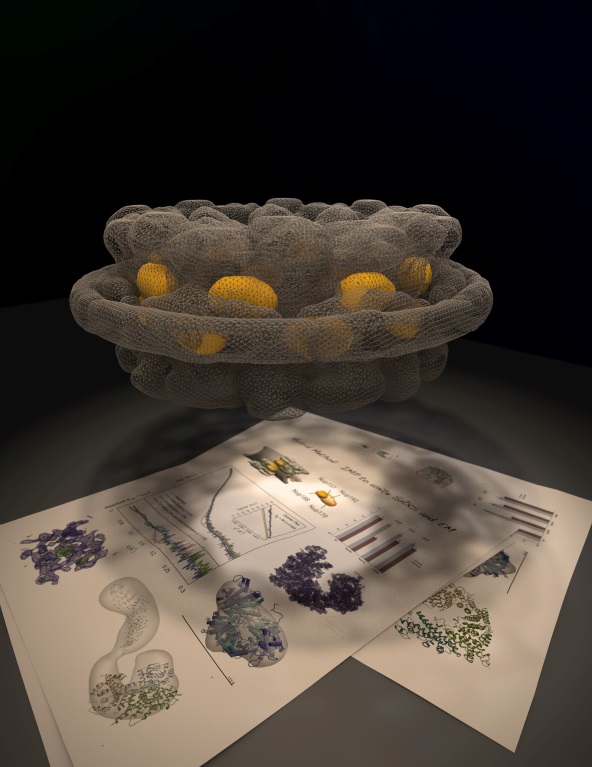 The Nuclear Pore Complex (NPC) is a 50 MDa macromolecular assembly solely responsible for the transport of macromolecules across the nuclear membrane within the eukaryotic cell. The core structure of the NPC (shown as a wire-mesh) is made up of two outer rings, two inner rings and a membrane ring. A hybrid method approach was used to determine the detailed architecture of the NPC combining structural data from crystallography, small-angle x-ray scattering, normal mode analysis, molecular dynamics simulation and electron microscopy as well as information from functional and biochemical studies.

Nuclear pore complexes (NPC) are large, octagonally symmetric, cylindrical macromolecular assemblies formed at the fusion of the inner and outer nuclear envelope membranes in eukaryotes. The NPC is responsible for the rapid, active, and selective exchange of macromolecules between the nucleus and cytoplasm. As both the gatekeepers of nucleocytoplasmic transport and a platform for the organization of numerous nuclear activities, NPCs contribute to the regulation of myriad physiological processes, including gene expression, cell cycle control, and spindle and kinetochore assembly.

Researchers then obtained a structural model of full-length ScNup192 based on EM, the structure of ScNup192(2–960), and homology modeling. Evolutionary analyses using the ScNup192(2–960) structure suggest that NPCs and vesicle-coating complexes are descended from a common membrane-coating ancestral complex. Finally, experimental suppression of Nup192 expression led to compromised nuclear transport, suggesting a possible role for Nup192 in modulating the permeability of the NPC central channel and ensuring efficient nuclear transport.