Mechanism of Regulatory Protein’s Dual Role as Inhibitor and Activator 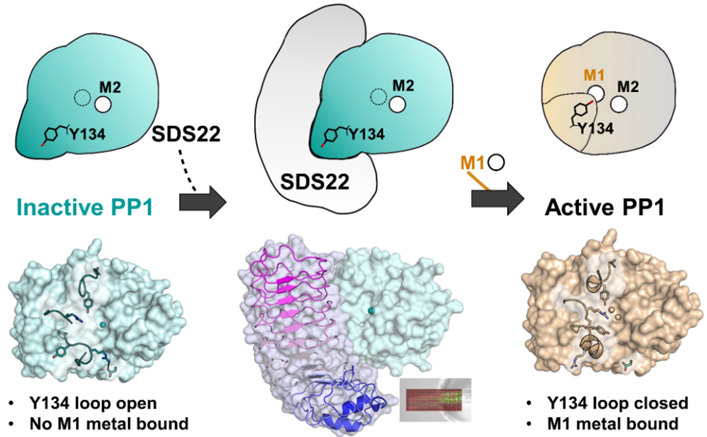 X-ray crystallography reveals mechanism of holoenzyme formation. To activate the protein phosphatase 1 (PP1) enzyme, which is involved in numerous fundamental cellular processes, regulatory protein SDS22 binds to and stabilizes it. Next, a zinc ion (Zn2+) is loaded into one of PP1's metal sites (M1). Only then can SDS22 release from the now active PP1. [Reprinted with permission from Choy, M. S., et al. 2019. “SDS22 selectively recognizes and traps metal-deficient inactive PP1”. PNAS 116 (41) 20472–481 DIO:10.1073/pnas.1908718116. Copyright 2019 National Academy of Sciences.]

PP1 accounts for more than half of dephosphorylation reactions in eukaryotes and is exceptionally well conserved from fungi to humans in both sequence and function. PP1 is involved in numerous fundamental cellular processes including mitosis, protein synthesis, and regulation of membrane receptors and channels.

PP1 is controlled by more than 200 regulatory proteins which enable it to bind to a wide range of substrates in a highly specific manner. SDS22 is known to act as both an inhibitor and activator of PP1, but the mechanism used to achieve this dual role has been unclear.

X-ray macromolecular crystallography revealed that SDS22 exclusively binds and traps a previously undescribed metal-deficient conformation of PP1, rendering it inactive. Once the complex forms, it does not permanently dissociate until PP1 binds the missing metal ion. Thus, SDS22 acts as a “PP1 trap,” providing a pool of PP1 poised for the rapid formation of new holoenzymes in response to dynamically changing cellular events.

Taken together, the data reveal the critical role of metal binding in PP1 activation and provide fundamental insights into the mechanisms by which SDS22 inhibits and stabilizes PP1 prior to holoenzyme formation. Understanding the mechanisms of PP1 holoenzyme assembly and activation could lead to novel therapies for diseases associated with PP1 signaling.