Structure of a Flavoenzyme Assembly Intermediate 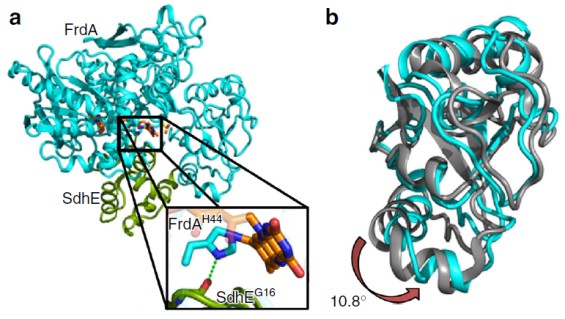 (a) The structure of the FrdA-SdhE flavoenzyme assembly intermediate: flavoprotein subunit FrdA (cyan), assembly factor SdhE (green), flavin adenine dinucleotide FAD (orange sticks), and malonate (yellow sticks). The boxed region highlights the covalent interaction between the FAD and the enzyme. (b) Overlay of the flavin-binding domains of the FrdA subunit from the FrdA-SdhE intermediate (cyan) and the FrdA subunit from the mature assembled FrdABCD complex (gray). A rotation of 10.8° is observed in the capping domain of the assembly intermediate when compared to assembled FrdABCD. [From Sharma, P., et al. “Crystal structure of an assembly intermediate of respiratory Complex II,” Nat. Commun. 9, 274 (2018). DOI:10.1038/s41467-017-02713-8. Reused under a Creative Commons license (CC BY 4.0, https://creativecommons.org/licenses/by/4.0/.)]

Enzymes frequently depend on an electron transport cofactor for executing catalytic functions such as reduction-oxidation (redox) reactions. For flavoenzymes, the cofactor is flavin adenine dinucleotide (FAD), whose binding type with the enzyme impacts the redox potential and thus reaction chemistry, such as for metabolism and detoxification.

Researchers discovered that the structure of an assembled flavoenzyme intermediate reveals the mechanism of covalent flavin binding in respiration. Assembly factors include SdhAF2 in humans, SdhE in Escherichia coli, and Sdh5 in yeast. Other revelations include that mitochondrial flavoenzymes drive both noncovalent and covalent redox reactions and that the assembly factor (SdhE, a small protein of ~90 to 140 amino acids, conserved in all kingdoms) in the structure of the SdhE:FrdA complex with covalent FAD stabilizes a conformation of the flavoprotein subunit FrdA that favors succinate oxidation.

Researchers fixed the E. coli FrdA-SdhE intermediate via site-specific crosslinking, resolving the structure to 2.6 angstroms (Å). This study identified that SdhE stabilizes an FrdA conformation that likely enables the mechanism of autocatalytic covalent flavinylation. FrdA’s FAD-binding domain and capping domain both interact with SdhE, but structural data revealed a 10.8° difference in their angles.

The investigators believe that domain rotation affects flavinylation, showing that enzymes are tuned to catalyze reactions in different ways and that conformational diversity can directly relate to catalytic mechanism diversity.