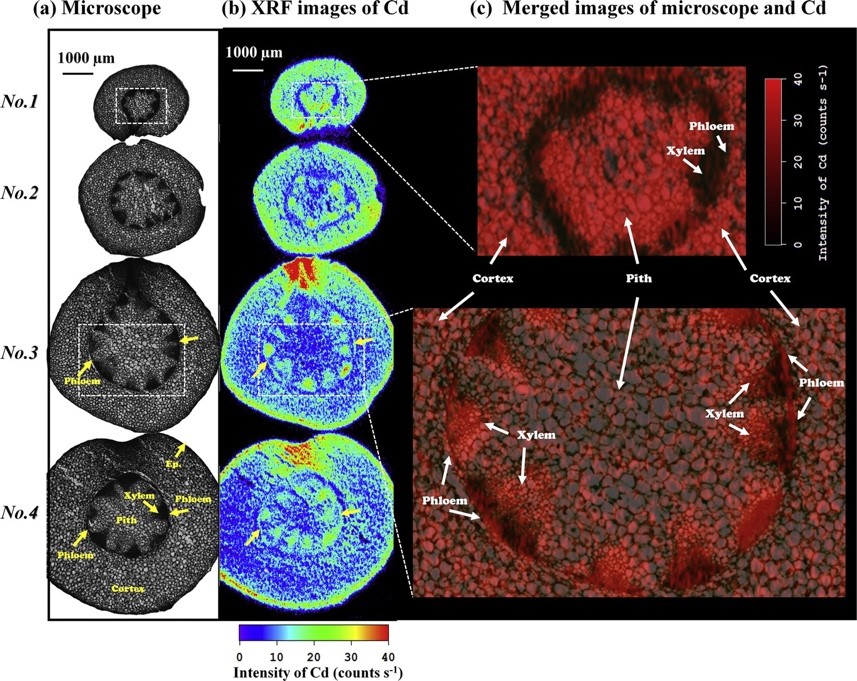 Light microscope images of cross sections of stems (left), with age increasing from No.1 to No.4. X-ray fluorescence (XRF) images of the cadmium (Cd) distribution in corresponding cross sections (middle). XRF images of selected regions (right) show distribution of Cd at higher spatial resolution, which are overlain with the light microscope images. Note the high Cd intensities in the phloem from the cross section of the oldest stem. [Reprinted with permission from Elsevier from Hu, Y., et al. 2019. DOI:10.1016/j.jhazmat.2018.11.034]

Cadmium (Cd) is a toxic metal that contaminates soils, particularly in industrialized regions. It can threaten human health, particularly because it readily accumulates in the edible parts of crops, thereby exposing humans through their diet. Some particular plant species are known to be hyperaccumulators, taking up and storing much more Cd (up to 100 mg/kg) than is typical. This characteristic can be exploited to remove Cd from soil, a process termed phytoremediation.

Metal hyperaccumulation has traditionally been attributed to rapid uptake by roots, enhanced transport of metals from roots to shoots, and, finally, efficient metal sequestration and detoxification in the shoots. However, it is not well understood how and whether metals can be redistributed throughout the plant as it ages. The current work sought to investigate whether Cd could be transported in phloem, a tissue in vascular plants that is responsible for moving nutrients around to parts of the plant where they are needed. Nutrients are often redistributed from old to developing tissues during plant growth, but, before this study, it was unclear whether the same process occurs for toxic metals.

Hu et al. used X-ray fluorescence (XRF) imaging performed on beamline14-3 at the Stanford Synchrotron Radiation Lightsource (SSRL), in combination with bulk measurements of the Cd concentration in both old and young leaves and stems, to determine whether Cd would be transported from old to young parts of the plant in the hyperaccumulator Sedum alfredii.

Their results show that Cd concentrations were in fact significantly higher in young, developing leaves and stems relative to mature ones. Cross sections of the stems also showed that the distribution of Cd among different types of tissues varied between the young and old stems. In younger stems, Cd was found in the pith and cortex. In the older stems, tissues near the junction of leaves and stems showed elevated Cd presence. Additionally, Cd was elevated in the curvilinear outer layers of the vascular bundles, where phloem tissue is located.

In summary, Hu et al. demonstrated the ability of the hyperaccumulating plant S. alfredii to reallocate Cd from old to young tissues via translocation in phloem. Reallocation of Cd among different tissues may contribute to the survival of the plant. Although hyperaccumulators have high tolerances toward metals, the redistribution of Cd may ensure that Cd concentration does not become too high at any location as the plant ages. Finally, redistribution of Cd has the benefit that less Cd is lost in senesced leaves, enhancing the efficiency of phytoremediation.