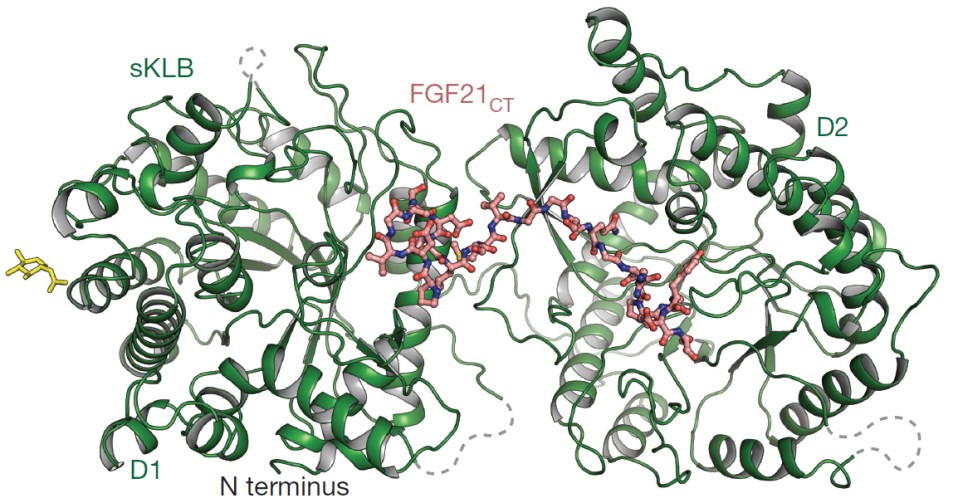 Named after the Greek goddess who spun the thread of life, Klotho proteins play an important role in the regulation of longevity and metabolism. Alpha-Klotho is a membrane-spanning protein expressed predominantly in the kidney, as well as in the brain. Mice lacking a-klotho exhibit a range of signs associated with aging and have elevated blood phosphate levels. Like a-klotho, ß-klotho functions as a co-receptor for endocrine fibroblast growth factors (FGFs). FGF21 is secreted from the liver following fasting, acting in fat cells and the brain to induce metabolic adaptation to fasting and responses to stress. Although FGF receptors (FGFRs) are expressed in a wide range of tissues, expression of the ß-klotho “longevity” protein in the liver, fat, and brain restricts the target organs of these endocrine FGFs.

In a recent Yale Medical School-led study, researchers revealed the three-dimensional (3D), high-resolution structure of ß-Klotho, illuminating its intricate mechanism and potential for antiaging therapeutics, as well as for treating a wide range of medical conditions. X-ray crystallography data revealed critical molecular interactions required for hormone binding and cell activation. The specific “zip code”-like interactions of ß-klotho receptors appear to regulate critical metabolic processes in the liver, kidneys, and brain, among other organs. Analysis yielded several insights, including that ß-Klotho is the primary receptor that binds to FGF21, a key hormone that stimulates insulin sensitivity and glucose metabolism, causing weight loss. The researchers believe this new understanding can guide the development of therapies by improving the biological activity of FGF21. Also found were a new variant of FGF21 that has 10 times higher potency and cellular activity and the evidence of how a structurally related enzyme (glycosidase) that breaks down sugars evolved into a receptor for a hormone that lowers blood sugar. Researchers believe the untangled ß-Klotho structure presents a platform for exploring and developing agents that either enhance or block the pathway, enabling therapies for conditions such as liver cancer and bone diseases.