Mapping the Migration of Genetic Material 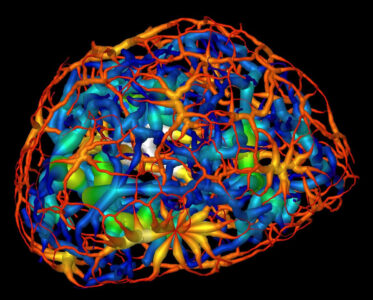 Researchers have used a powerful soft X-ray microscope to capture tomographic images of the genetic material in the nuclei of nerve cells at different stages of maturity. This first quantitative analysis of nuclear organization in intact mammalian cells has generated detailed three-dimensional (3D) visualizations that show an unexpected connectivity in the genetic material, called chromatin. The results could aid in understanding how the patterning and reorganization of chromatin relate to the specialization of a stem cell’s function as specific genes are activated or silenced.

Understanding the logic of nuclear architecture and how it contributes to stem-cell differentiation remains challenging. Until now, imaging the nucleus was possible only indirectly, by staining it, hopefully with even distribution. In this work, researchers used soft X-ray microtomography to record a series of images from mouse olfactory nerve cells in three separate stages of development. This unique technique provides a new way of looking at the nucleus without the need to chemically treat the cell, allowing visualization of intact cells in a near-native state at a resolution of about 50 nanometers.

After imaging frozen cells at each stage from dozens of different angles, the researchers used each set of 2D images to calculate a 3D reconstruction detailing the changing chromatin formations in the nucleus, collecting the images using soft X-rays within the “water window” [i.e., 284 to 543 electron electronvolts (eV)]. The absorption of X-rays by biomolecules is linear with biochemical composition and concentration, generating a unique X-ray linear absorption coefficient measurement for each voxel (3D pixel analog). Thus, the researchers were able to visually distinguish between different types of chromatin—heterochromatin, due to an increased biomolecular concentration, appears darker than euchromatin in computer-generated tomographic orthoslices (virtual sections) through the nucleus.

The results showed that chromatin compaction increases as the cell matures, and that condensed chromatin moves to the nuclear core during differentiation. Though the chromatin was thought to exist as a series of disconnected islands, the results showed how it was compartmentalized into two distinct regions of “crowding” that form a continuous network throughout the nucleus. Also, based on comparison of these results to those of similar cells in which the gene for a heterochromatin binding protein had been inactivated (“knocked out”), the researchers concluded that it regulates the reorganization of chromatin in mature neurons.

Soft x-ray tomography provides a powerful method to study chromatin and nuclear architecture in vivo. There is no need for chemical fixation and sectioning, preventing a plethora of artifacts introduced either by fixatives or by visualization of only thin sections. The researchers believe performing statistical analyses is now possible to based on large collections of cell nuclei images sorted by different stages of development.

Funding Acknowledgements: Research reported in this publication was supported by grants from NIH (R01DA030320 and U01DA040582 to S.L. and C.A.L.). The National Center for X-ray Tomography is supported by NIH (P41GM103445) and DOE’s Office of Biological and Environmental Research (DE-AC02-5CH11231).