Modular Construction on a Biomolecular Scale 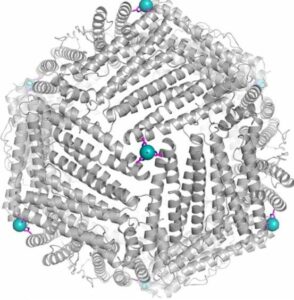 The spherical protein ferritin was used to synthesize a porous 3-D crystalline framework material, and further engineered to have metal hubs on its surface. Organic molecules bridge these hubs, and in a controlled way create a porous material with potential uses from efficient fuel storage to carbon capture and conversion. The study shows the great potential for proteins as building blocks with exquisite properties of electron transfer and bioinspired catalysis.