The Origins of Photosynthesis in a Sun-Loving Bacteria 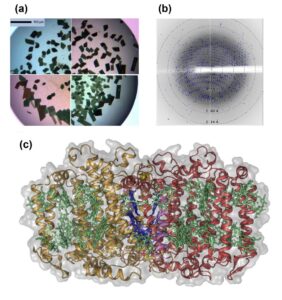 Reaction centers (RCs) are pigment-protein complexes that drive photosynthesis by converting light into chemical energy (electrons) to power the cell, possibly arising from a homodimeric protein. The symmetry of a homodimer is broken in heterodimeric rRC structures, while the 2.2-Angstrom resolution X-ray structure of the homodimeric RC-photosystem from the phototroph Heliobacterium modesticaldum exhibits perfect C2 symmetry. The core polypeptide dimer and two small subunits coordinate 54 bacteriochlorophylls and 2 carotenoids that capture and transfer energy to the electron-transfer chain at the center, which performs charge separation and comprises 6 (bacterio)chlorophylls and an iron-sulfur cluster; unlike other RCs, it lacks a bound quinone. This structure preserves characteristics of the ancestral reaction center, providing insight into the evolution of photosynthesis.

Enough sunlight hits the Earth to power the planet many times over—if energy capture were more efficient. Thus, scientists have looked at nature’s means to understand photosynthesis in a sun-loving, soil-dwelling bacterium. A team of scientists has gained a fundamental understanding of the inner workings of this vital process and how it differs among plant systems. Their discovery may provide a new template for beginning organic-based solar panel design (i.e., “artificial leaves”) or possibly renewable biofuel applications.

But the team’s structural biologists are capturing freeze-frame images of crystallized proteins throughout the whole process of the simplest form of photosynthesis, in the single-celled heliobacteria, which are fundamentally different than plants. Instead of using water like plants, for example, heliobacteria use hydrogen sulfide and grow without oxygen; after photosynthesis, they give off the foul-smelling sulfur gas in place of oxygen. The scientists grew the “perfect” X-ray diffracting crystal charge after many initial trials. In this breakthrough study, they found an almost perfect symmetry in the heliobacter RC, which helps it gather every available photon of near-infrared light to build chlorophylls.